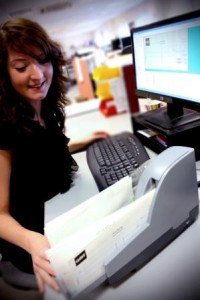 Financial organisations and their customers are being urged to fully embrace the digitisation of cheques, as the payment tool undergoes the most significant revamp in its 358-year history. That is the key message from Martin Ruda, Group Managing Director of The TALL Group of Companies, as the first phase of the highly anticipated Image Clearing System (ICS) comes into effect.
From Monday 30th October, the cheque clearing infrastructure is now in place to accept data and scanned images, in lieu of the actual paper cheque, and by the end of 2018 it is expected that all banks will be required to clear cheques on the image and data files alone. As a result, cheques will be ‘truncated’ (digitised) at the point of deposit, and will no longer be transported during the clearing process. The paper document will have no legal value once imaged and that image transmitted into the infrastructure, so the integrity of the digital image becomes fundamental to its use as the ‘instrument’ to achieve the funds transfer.
Industry commentators have overwhelmingly agreed that the introduction of the cheque Image Clearing System (ICS) will drastically enhance the efficiency of the cheque as a payment tool. By agreement with their bank or building society, account holders will now be able to submit images of the cheque they intend to deposit via a desktop cheque scanner or a smartphone app. Following the full implementation of ICS, all items deposited on a weekday will be cleared by 11.59pm the following weekday.

Earlier this month, delegates at The Third Annual Conference on Cheque Imaging and Remote Deposit Capture, hosted by The TALL Group of Companies and Digital Check Corporation, were told that banks and building should correspond frequently and efficiently with their customers regarding the changes, if they are to reap the full benefits of the new framework.
However, Martin Ruda believes that whilst many consumers are still unaware of the introduction of ICS, the new system will be successful in the long-term. He said: “The digitisation of cheques has proven to be very effective across numerous countries for many years, and the long-awaited introduction of ICS is a significant event as the UK follows suit. With an emphasis on speed and convenience, we encourage banks and building societies to fully embrace the modernisation of the cheque clearing process, which will lead to increased efficiencies for the financial organisations as well as their valued customers.
“As the introduction of ICS has been on the UK’s agenda for a lengthy period of time, this has given the wider industry the opportunity to innovate and develop new services that can be utilised by banks and building societies to assist with the implementation of the new system. This includes scanner fulfilment management services – which covers logistics, customer service, software integration and exception management – as well as highly sophisticated solutions designed to protect financial organisations and their customers from any attempted fraudulent activity surrounding the implementation and bedding in of the new clearing system,” he added.

Rob Palmer from Bank of Montreal addresses the audience at the 3rd Annual Conference on Cheque Imaging and Remote Deposit Capture in London.

Rob Palmer from Bank of Montreal addresses the audience at the 3rd Annual Cheque Imaging Conference at the Stationers’ Hall in London.

Earlier this month, around 40 representatives from Britain’s major banks joined us in London for the Third Annual Conference on Cheque Imaging and Remote Deposit Capture – a yearly event that Digital Check has held in conjunction with its UK partner the TALL Group. This year’s conference held special importance, coming on the eve of the country’s transition to the new Image Clearing System (ICS) beginning in the last week of October 2017.

In addition to delegates from Digital Check and the TALL Group, speakers included Stuart Cole from industry standard-setter the Cheque & Credit Clearing Company, and Rob Palmer from Bank of Montreal, who spoke about his own bank’s experience with introducing cheque capture and remote deposit when it became legal in Canada in 2014. Attendees also shared some of their own plans for rolling out image capture in its various forms.

British banks look to be taking a much different track to introducing cheque imaging than the United States did back in 2004, in no small part because the technology available today is far more advanced than what was available more than a decade ago. In particular, fraud prevention tools such as duplicate detection and risk assessment are being built into the overall system from the start – a technology that did not exist when the United States launched its system and which has proved difficult to add retroactively. Since cheques in the UK also incorporate ultraviolet security printing, banks may also have the option to conduct automated screening to weed out suspicious items, based on an analysis of the invisible UV ink layer. Checkprint have used Digital Check’s UV technology within its own cheque fraud prevention software tools, CheckMate.

The ICS is also based on a “switch” architecture instead of the central electronic clearinghouse model – meaning that clearing takes place closer to real-time, and also allows for the possibility of non-banks (such as corporate treasury departments) to access the network directly.

It appears that most banks in Britain are planning to go with teller capture, not back-office branch capture. The reason, somewhat surprisingly, is that a number of banks have already had cheque scanners deployed at the teller window for years – not for electronic clearing purposes, but as a branch productivity tool to reduce paperwork, and to capture at least the MICR codeline. While not every bank has moved to such a system, several of the major ones already have it in place, making the transition somewhat easier for them.

The general market consensus for remote deposit is that mobile capture will come before desktop, as there’s a lot of emphasis on mobile banking in the UK. Mobile RDC has also proven to generate the most hype in other countries that have introduced cheque capture recently – including Canada and Brazil – so the pressure is on to be quick to market.

Because Britain is employing a “soft” rollout of image-based clearing – some banks will exchange some cheques via the new process next month, but full participation won’t be required until sometime in late 2018 – it appears the path to remote deposit will be more relaxed than it was in Canada or Brazil. Most attendees expected about a six-month lag time from the initial pilot-like phase of intrabank clearing to the introduction of customer-facing RDC.

As BMO’s Palmer pointed out, Canada’s banking system probably resembles the UK’s more closely than any other in the world, with the two countries sharing similar numbers of banks, cheques, and customers, and with very similar technology available at the launch of truncation. The Canadian rollout may have been the smoothest in the world so far, and as its electronic clearing system approaches its third anniversary, participation is nearly total and remote capture has seen rapid uptake. That remains the ideal case to beat, but attendees at the conference were encouraged to hear that Britain is more or less on track to match it.
The new electronic system is expected to reduce clearing times by up to five days: Currently, paper cheques are delivered to central clearing hubs by road or rail for routing to the receiving institutions; however, under the new rules, all items deposited on weekdays will clear by 11:59 pm on the following business day.

Most attendees at the conference agreed on the need to fully communicate their plans ahead of the ICS rollout, enabling customers to take advantage of the new funds availability rules and, eventually, remote capture opportunities.