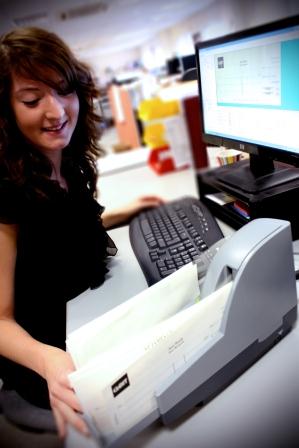 Remote Deposit Capture originated in the United States as a result of the Check 21 Act, which took effect in 2004.
What many people don’t realise is that Check 21 was primarily intended as a way to improve the behind-the-scenes cheque settlement process for banks, and that Remote Deposit Capture was merely a side effect.

Prior to 2004, American banks cleared cheques by physically exchanging the original paper documents. Given the geographical distances involved, this required a fleet of more than 50 private aircraft that made cross-country flights every night for the sole purpose of delivering paper. However, following the events of Sept. 11, 2001, all air transport was shut down for three days, causing parts of the financial system to grind to a halt as well. By official estimates, the backlog of uncleared cheques caused approximately £42 billion (today’s valuation) to be stuck in limbo.

As a result, Congress sought a way to eliminate this “weak link” from the cheque clearing process in the event that another disaster closed the airports again, and settled on exchanging images electronically rather than transporting the physical documents. (In the UK, thanks to the shorter distances, trains and couriers were used instead of planes, perhaps lending less urgency to this particular issue.) It was thanks to the particular wording of the law, which gave cheque images the same legal standing as the original cheques themselves, that Remote Deposit Capture – scanning of cheques by non-banks – became possible as well